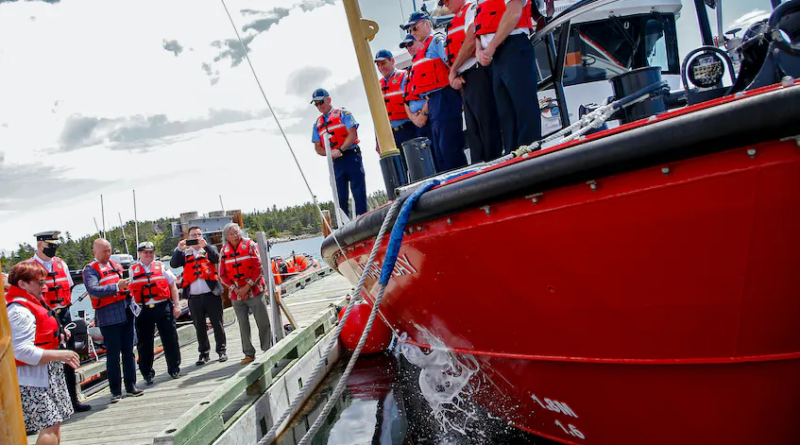 Modern practices for naming and bringing vessels into service vary between marine departments of the Government of Canada, despite there being some common bases in maritime history.  The following provides basic descriptions of some current practices within the Canadian Coast Guard (CCG).

Selecting and assigning a ship name in the CCG

A vessel’s name is proposed within the CCG in accordance with a Coast Guard Operations Order (CGOO).  CGOO 103.00 Ship Naming Policy (1) provides a list of conventions for naming CCG vessels by class of vessel; for example, icebreakers are named after former Canadian Prime Ministers, Offshore Oceanographic Science Vessels and Offshore Fisheries Science Vessels are named after former Canadian scientists or explorers, and SAR lifeboats are named after Canadian capes (for high speed lifeboats) and Canadian bays (for high endurance lifeboats).  Vessels under long-term charter by the CCG may also be renamed in accordance with this order where deemed appropriate and practicable.  The Minister of Fisheries, Oceans and the Canadian Coast Guard approves the name proposed for each vessel by the Director General, Operations, after which the name is affixed visibly to the hull of the vessel and is announced publicly.

Registering a CCG ship and name

Once a name has been approved, the CCG reserves the name with the Registrar’s office at Transport Canada Marine Safety (TCMS).  The shipbuilder will typically apply for a Provisional Registry through TCMS using the proposed name or using its own designation, such as Hull #xxx.  When the Crown accepts the vessel from the shipbuilder in accordance with the contract, ownership transfers to Canada – represented by the Public Services and Procurement Canada contracting officer – then immediately to the CCG.  Subsequently, the CCG applies to the TCMS Registrar to register the ship in accordance with CGOO 105.00 Ship Registration and Name Changes.  All CCG ships are registered at the port of Ottawa.

Changing the name of a CCG ship

The CCG occasionally changes the name of one of its ships.  For example, Canadian Coast Guard Ship (CCGS) Sir John Franklin began her life in 1978 as CCGS Franklin and was renamed CCGS Sir John Franklin in the 1980s, was declared surplus in 2000 and renamed ‘2000-02,’ and then reconfigured as a science ship, reactivated in 2003 and renamed CCGS Amundsen.  When a CCG ship is being disposed, the registered name is changed to a year and sequential number.  The former CCGS Matthew was renamed ‘2015-03’ when she was declared surplus in 2015 and prepared for sale via BuyandSell.gc.ca.

Sometime after acceptance and typically months after a ship enters CCG service, a “Dedication to Service Ceremony” is held in accordance with CGOO 106.00 Naming and Dedication to Service Ceremony with speeches, a sponsor, breaking of a bottle of Canadian sparkling wine or suitable alternative over the bow (in place of the traditional champagne) over the bow, and related trappings.  This is a celebration of a vessel’s incarnation, but obviously she will already have been ‘named’ in several respects.

Media reports prior to the dedication of service ceremony can be incorrect or misleading.  The words “the future CCGS Sir John Franklin” when read in an article should be interpreted to mean “the ship that will become, upon delivery to and acceptance by the CCG, the Canadian Coast Guard Ship Sir John Franklin.”  The vessel belongs to the shipyard until that transaction.

The National Shipbuilding Strategy Needs to be Revamped 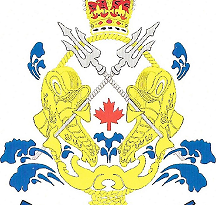