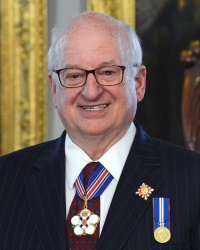 Arthur Joseph LeBlanc was installed as the 33rd Lieutenant Governor of Nova Scotia on June 28, 2017.

His Honour was born in West Arichat, Nova Scotia in 1943 and attended primary and secondary schools in that region. He graduated from St. Francis Xavier University in 1964 with a Bachelor of Commerce Degree and he earned a Bachelor of Laws Degree from Dalhousie University in 1968.  Following graduation, he was admitted to the Nova Scotia Barristers’ Society in November 1968.

His Honour practiced law for over 30 years, initially as an associate of Vincent deP Burke and subsequently as senior partner of the law firm LeBlanc MacDonald and Pickup and this firm was succeeded by LeBlanc MacDonald.  He maintained a solicitor’s practice and subsequently concentrated his practice in civil litigation.  In 1983, His Honour was appointed as Queen’s Counsel in recognition of his distinguished law career.

In 1998, he was appointed as a Justice of the Supreme Court of Nova Scotia (General Division) and served on the bench until he was installed as Lieutenant Governor.

His Honour is the Chancellor of the Order of Nova Scotia and is a recipient of the Queen’s Golden Jubilee Medal.

His Honour is married to Her Honour Rosemarie Patricia (Patsy) LeBlanc (née Lirette), who was born in Beresford, New Brunswick.  Together, they have three grown sons, Pierre, André, and Robert.  They have six grandchildren.