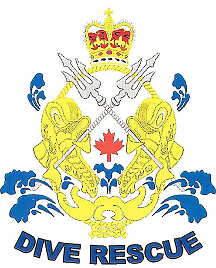 The first part of the title, loosely translated from Latin, means Fire from the Belly.  This was the motto of our 2003 Canadian Coast Guard (CCG) Dive Rescue training class whilst we struggled through the labours to which Tim, John and the other trainers subjected us in the pool, at the dock shed in Steveston village, Richmond, and at the Kitsilano Coast Guard Station (CGS).  We were the second of two groups trained that year to become members of a newly formed, elite, one-of-a-kind in Canada Dive Rescue team, destined to operate out of the CCG hovercraft station based at Sea Island, Richmond, BC.

Reminiscent of other past government decisions to cut CCG programs like the original dive rescue team, manned lighthouses and the Kitsilano CGS, the present government announced at the end of May their intention to axe the current Dive Rescue team and reallocate the $500,000 per year savings and personnel to other CCG areas.  There were also plans to close two lifeboat stations and to discontinue a salmonid enhancement program.  Search and rescue (SAR) experts, industry, the public and politicians lined up against these decisions while the government played a bait-and-switch policy saying they were increasing total CCG funding.  As an aside, the CCG has been chronically underfunded for decades and is in woeful shape.

On 15 Jun 2017 the Standing Committee on Fisheries and Oceans was told that all of these programs would remain open and operational.

While determining budgets and public policy, it is difficult for politicians to determine the correct programs and facilities to fund and support.  Similar to shutting down a fire hall, you have an emotional public (who votes you in) on one side and bean counters (purveyors of fiscal reality) with hard statistics on the other.  In a case of absurdum, you don’t want to over-react to a perceived issue like Homer Simpson and his ill-conceived Bear Patrol.

These were my arguments, both emotional and logical, in favour of keeping the Dive Rescue Unit intact.

Working as a first responder is a calling, not a labour.  I had my first taste of search and rescue as a young man posted to Canadian Forces Base Summerside, PEI.  The waters of the Gulf of St Lawrence were particularly treacherous mid-December 1990 and numerous sailors from Le Bout de Ligne, Nadine, Straits Pride II and a couple of foreign cargo vessels lost their lives in a three day storm.  CCG ships, military aircraft, commercial ships and fishing vessels conducted a multi-day search.  I volunteered to fly in one of the 413 Transport and Rescue Squadron Buffalo aircraft as a spotter.  Conditions were atrocious in the rear of a bucking Buffalo.  The aircraft was buffeted by 70 knot winds whilst we flew 500 feet over 70 foot high waves.  Reports from a CCG ship stated that sea conditions were so bad that lifeboat survivors next to the ship could not be brought onboard before succumbing to the elements.  Most sane individuals run away from conditions like these while SAR personalities see it as an opportunity to deter Death’s collection of souls for that day.  I didn’t see a damn thing in the back of that Buffalo in all the hours patrolling back and forth between PEI and Newfoundland but I imagined that those doomed sailors died knowing that we at least tried.  The collective SAR effort saved none of the three Le Bout de Ligne sailors, two of the ten Nadine sailors and three of the six Straits Pride II sailors that night.  Divers from CCG Ship G.C. Gorton recovered one of the victims from the wreck before it sank.  I am sure the families of the rescued and recovered sailors were not thinking of the cost of the efforts put towards finding their loved ones.

Fast forward thirteen years and I was a newly trained Rescue Specialist with the CCG Dive Rescue Unit.  We were pumped up after an intensive seven week training course (last I heard it is now a thirteen week course) and eager to put our life saving skills to use.  Media attention was high, we were giving tours, interviews and receiving plenty of favourable press coverage.  I did not have a long wait before my first major incident as just a few shifts into my new career, my team responded to reports of a security van in the water at the Vancouver Centerm Pier.  The call ran like clockwork.  We arrived on scene well within our rescue window, fire trucks were lighting up the area where they said the van had hit the water and we had a diver deployed within minutes.  All good except there was no van, no occupants and no rescue.  I was the third diver in the water when word came down that our Captain had discovered evidence (scratches on the pier’s bull rail) that the van was probably at the stern of the hovercraft rather than the bow where we had been directed to search.  Through no fault of their own, the land based emergency services had pointed us in the wrong direction and we were well past rescuing a husband and father of two young children.  Disbanding the Dive Rescue Unit will severely diminish inter-agency cooperation and the knowledge base between the CCG, the military and civilian emergency services.  Over fourteen years of hard fought expertise is in danger of being lost if this decision goes through.  The grown children of that deceased security guard will not be happy that lessons from their father’s death will be forgotten.

Unimaginative bean counters and CCG brass have been whittling away at the Sea Island dive team for decades, citing cost as a major issue.  I understand that sometimes you have to equate a dollars and cents figure to how many lives have been or may be saved by a particular organization.  In my three plus years with the Dive Rescue Unit, I saved one life while diving.  I also participated in many dive incidents where we were too late.  So if you’re looking for bang for your buck, Dive Rescue is a long shot.  But if you’re looking at discontinuing the dive capabilities, then who is going to dive on the 10 to 12 vehicles per year that end up in the Lower Mainland waters to check for occupants?  Who is going to respond to distressed divers at Whytecliff Park, or the artificial reefs off Vancouver Island and in Howe Sound?  Who is going to check overturned vessels or crashed aircraft for survivors?  These are just stats of my participation, let alone the decade’s worth of SAR calls since I left the unit.  Military SAR Technicians, police and fire units are not equipped, cannot respond or do not have the expertise to respond adequately to the incidents that routinely are attended to by the Dive Rescue Unit.  There would have been gaps and people would have needlessly died as impotent rescuers stood by.

The plan originally floated was to keep the hovercraft and a rescue team operational at Sea Island.  They were going to reduce the five person Rescue Specialist team from five down to probably two.  This would have drastically reduced the value added capabilities of the response team.  During my time at the station, only approximately 10% of the SAR calls involved diving with the rest being a grab bag mix of tracking down ELT/EPIRB signals, vessels in distress, transferring summer sun worshipper patients from Wreck Beach, looking for persons floating in the water, etc.  In addition we die buoy tending (visited Sand Heads Light a lot), pollution response (recovered discarded buoy batteries tossed in the water by previous CCG technicians), community outreach (public tours and numerous media clips), marine patrols (summer standby for Vancouver’s Celebration of Light fireworks shows), assisted university and Department of Fishery scientists, etc.  It never hurt to have a few extra trained bodies on hand as spotters, helpers or extra muscle especially for the more involved SAR incidents or day-to-day CG activities.

The nightmare scenario and the reason for hovercraft stationed near Vancouver International Airport since 1968 is to provide emergency service for an aircraft going down in the low tide mud flats next to the airport.  The mud extends for miles, and hovercraft are the only practical means of rescuing large numbers of survivors before the tide comes in to drown them.  Just such an accident occurred on January 2, 1966 when a Grumman G-21A Goose flown by BC Air Lines overshot a runway and landed out in the tidal flats.  It was difficult to extract the 10 survivors as the only means to reach them was by helicopter.  A couple of years later, on February 7, 1968, a Canadian Pacific Boeing 707 nearly did the same thing while skidding off the airport’s runway.  If the aircraft had continued on into the mud or the shallow waters of a low tide, rescuing the 61 crew and passengers onboard would have been challenging.  Later that year, in August, two SRN-6 hovercraft started regular operations from the station.  In 1971, Captain John McGrath became the station’s Officer-In-Charge and was instrumental in acquiring the larger hovercraft replacements for the SRN-6.  His other major project was to develop and implement his vision for a fully staffed Dive Rescue capability.  Captain McGrath, with the help of Rescue Specialist Tim MacFarlane, realized this dream with the creation of today’s Dive Rescue Unit in 2003.  But by government logic, since the Vancouver International airport has never had a serious large scale crash in the mud, then why continue the costly funding of the station and its two expensive hovercraft?  Why not retire the hovercraft and rely on shallow draft 733/753 Zodiacs and hope if a plane goes in that it happens at high tide?

The voices against the removal of the Dive Rescue Unit and the other CCG assets were loud enough for the government to take notice.  There were clear, emotional and logical arguments to keep these knowledgeable, dedicated, experienced heroes in place.  The half million/year reported ‘savings’ from discontinuing the Dive Team would have amounted to .02% of the CCG’s 2017 reported $2.5-billion budget.  (If you watch the Simpson’s clip, you’ll see how upset Homer gets over a measly extra $5 Bear Patrol Tax.)  Like my former classmates, these dedicated CCG personnel fight with ‘fire in their bellies’ while providing a demonstrated public service to the citizens of their SAR region of responsibility.

It is refreshing to have politicians reverse course once they have heard well-defined, reasoned opinions.  The Dive Team at Sea Island has built up a lot of good will over the years since it was first formed and on 15 June it was their turn to be rescued. 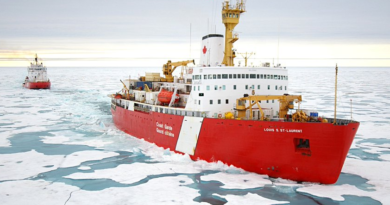 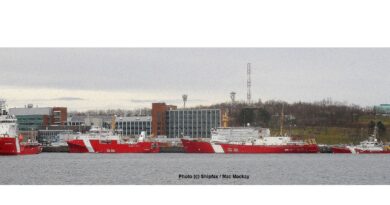