Isn’t it time for Canadians, and I mean the public and elected politicians, to urge the government into expediting the selection of the next generation fighter? Time is getting short before the current government fades away as it readies itself for the next election in October. This begs the question: when will the government announce a replacement for the Royal Canadian Air Force’s (RCAF) ancient CF188 Hornet fighter fleet? The three articles listed as footnotes address this sad issue.(see Notes)

It was recently announced by the government (quietly, I might add) that a competition will begin next month to find a replacement for the Hornet fleet.(1) Reading the other two articles(2)(3), doubt is already beginning to surface.

A multitude of factors are involved in this plea to equip our air force with a new fighter aircraft as quickly as possible. Here are but three:

Firstly, Expected Life Extension (ELE) plans initiated since the end of the conflict over Kosovo have been implemented for the most part, updating the RCAF Hornets to a satisfactory standard until now. The updated avionics and weapons systems (including the purchase of smart weapons) were satisfactory until the advent of fifth generation capabilities. Today, RCAF Hornets cannot survive in a truly hostile air environment. It must be pointed out that in Kosovo, Libya and Iraq, Canada did not face an air threat to operations – NATO owned the skies. No enemy air forces or ground based air defences posed a serious threat to RCAF operations. Now the RCAF Hornets are lagging behind our allies and indeed our adversaries. To put it bluntly – they are obsolete. But just one example: platform-to-platform communications and targeting cueing. This is what will equip and is equipping the next generation NATO and NORAD aircraft.   With advanced global military communications, RCAF pilots will require a Joint Helmet Mounted Cueing System which will allow the new computers and datalinks to exchange large quantities of data through a tactical targeting network and to fuse real time information during the air battle, making it instantly available to the pilot. The question then arises: will our pilots with the legacy Hornets be able to communicate in a future air battle? I think not.

Secondly, emphasis should be placed on low observability (read stealth) and low heat signatures, none of which pertain to the CF188. This could be a major factor in survivability. Why? RCAF Hornets have a large radar cross-section, and because the aircraft’s weapons are carried externally, it makes a good radar target. Our future fighter should be able to carry its weapons internally to make it a ‘low observable’ aircraft.

Finally, emerging integrated and networked air-to-air, surface-to-air, space and cyberspace threats threaten the RCAF’s capability to provide air support meaningfully to NATO at the time and place required in the highly contested operational conflicts of any future war. Nobody needs a new fifth generation fighter more than the RCAF, which today is operating the oldest combat fleet in its history. The CF188 Hornet was designed in the 1970s – long before words like ‘stealthy’ or ‘digital’ became the norm.   It doesn’t take a rocket scientist to determine that the legacy Hornets (which the just purchased Australian jets are) cannot hope to survive in and win in the airspace near any sophisticated enemy of the future. Is this is what we expect our highly trained pilots to face? As an aside, the final Royal Australian Air Force Hornets will not be received by the RCAF until 2022!

These are but a few of operational arguments. There are many more. For example, the vast geographical landscape of Canada means a longer endurance requirement for the future fighter. This is an important selection consideration when range and air refuelling come into play. Weapons loads and type is another factor. The selection team will have its work cut out with only four contestants in the running all of which are totally different platforms.

The most important factor however, is the time line we are facing. Even if a decision were made by the government in 2019 to purchase any of the four contenders for the future fighter, it would take a number of years to obtain the aircraft and simulators, train the technicians and aircrews and build the infrastructure necessary to support operations. The logistic problems involving the introduction of a new fleet of aircraft are also monumental. What does this tell us? Time is of the essence. Time is precious and we need action as soon as possible. This is a plea to the government to act now and equip the RCAF with the modern fighters it deserves. We can only hope that this vitally important issue is part of the platforms of the major political parties in the upcoming election. Reading David Pugliese’s article is more than worrysome.3

The country depends on the Canadian Armed Forces to defend Canada and indeed its allies. The RCAF cannot do this with an ancient fighter force. It will not survive! 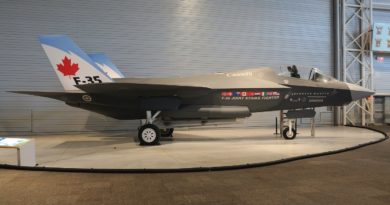