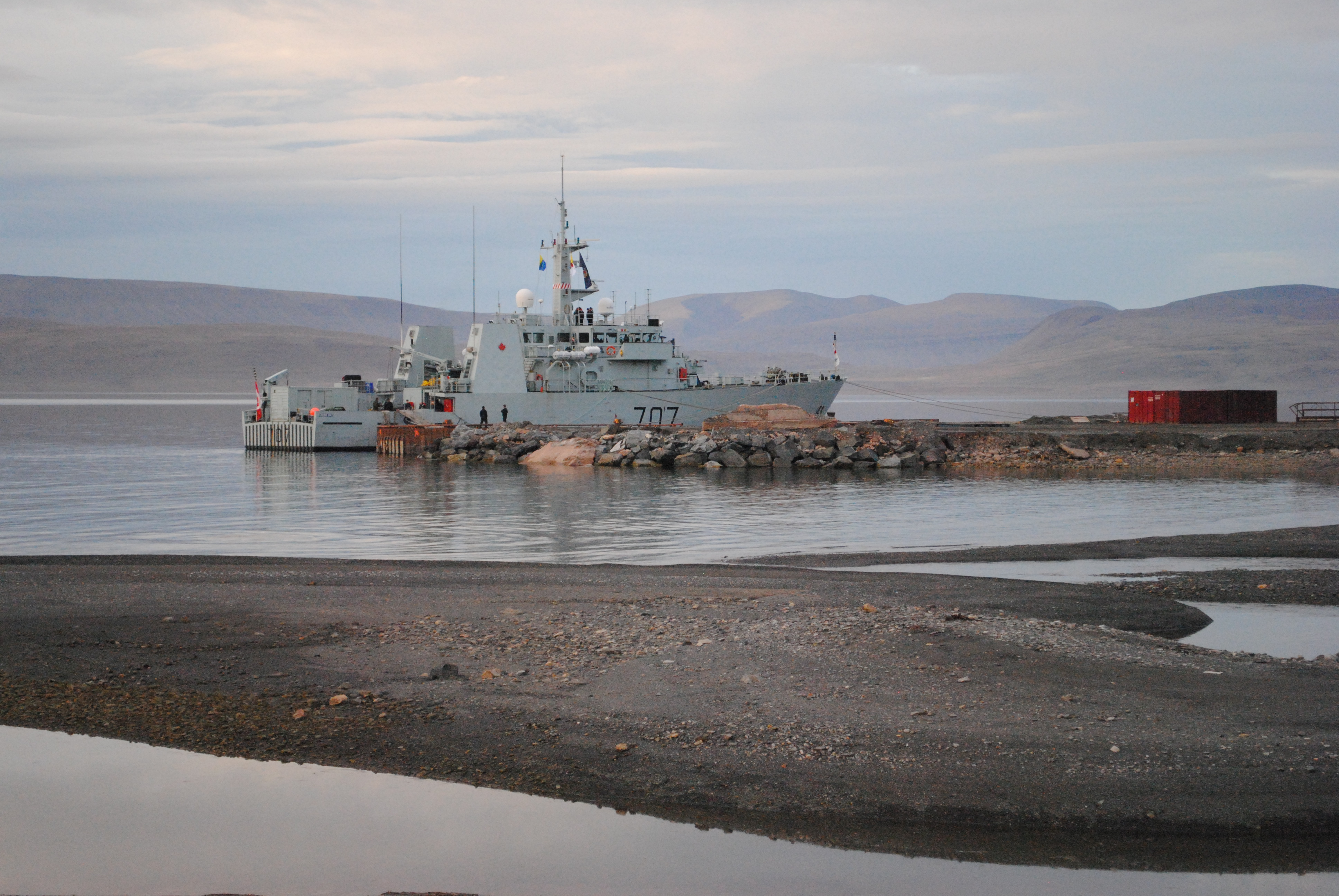 There are no true ports in the Canadian Arctic to accommodate large vessels. Yet, ships are the primary mode of transport for resupply and patrol in the region. Currently, ships have to weigh anchor and taxi to shore in small speedboats.

The new naval refuelling facility being built at Nanisivik, Nunavut, will represent the first functional deep-water port in the territory. The facility is being constructed on the northwest end of Baffin Island, 31 kilometres from the hamlet of Arctic Bay, at a defunct lead-zinc mine opened in the mid 70s and closed in 2002.

The federal project was announced in 2007, when Prime Minister Harper realized other polar countries were noticing Canada’s lack of Arctic attention and questioning its sovereign claim. Since then the project has been wrought with delays, funding cuts, redesign, environmental concerns and overall skepticism.

The Nanisivik Naval Facility was to be a fully operational year-round naval base positioned at the mouth of the Northwest Passage, a north-of-60 hub for the up and coming Arctic and Offshore Patrol Ships and a platform for establishing territorial claims, furthering the mandate of the Conservative government’s Northern Strategy.

Then they got the three-hundred-million-odd-dollar price tag.

The 2010 construction start date turned into a 2012 budgetary redesign where the project was scaled back to a seasonal docking and refuelling site with a wharf’s operator shelter and some dry storage for military and Coast Guard use. Modest repairs are being made to the existing jetty and a helicopter landing pad will be installed. Consensus: functional, but no fuss. In 2013 the Nunavut Impact Review Board returned the required land use proposal to Northern Affairs for not providing sufficient screening information (they provided impact information for facility installation but overlooked effects of subsequent operations on ecosystems, water supply and the socioeconomics of nearby indigenous communities). In 2014 the construction contract was finally awarded. Ground for the facility was broken this past summer. The project budget is $146 million, which includes design, construction, geotechnical and environmental studies, contingency, inflation and travel allowances, as well as the $14 million spent prior to 2013 on design, studies and project management. The plan is to be operational by 2017 and to reach official project completion in 2018, to correspond with the arrival of the navy’s first ice capable patrol ship, compliments of Irving Shipbuilding. Steel for the first Harry DeWolf-class ship was cut this past September.

The question is, does a seasonal refuelling site accomplish Canadian presence in the Arctic? Or, has this role been fully shifted to the Arctic patrol ships themselves, with Nanisivik demoted to a sovereignty sidekick, enabling presence, but not enforcing it. The site is, after all, a gas station.

Rob Huebert, associate director of the Centre for Military and Strategic Studies at the University of Calgary says, “One of the challenges that the government has faced is that the soil was contaminated to a larger degree than they were expecting.” A result of building on an old mine site, as contamination is an all too common by-product of resource extraction in the commercial sector. “The scaling back has been caused because the environmental remuneration they are doing has taken up more effort.”

Still, the location was chosen strategically, as the facility must serve both east and west coast vessels and be located for prime security patrol. Nanisivik lies near the entrance to Lancaster Sound, the first point of entrance to the Northwest Passage. In terms of geography and the ease of working with existing infrastructure, “this was probably the best bet,” says Huebert. “It represents one of the best middle points you could have.”

Surrounding controversy has a lot to do with poor transparency. “It’s out of view, and this government has a propensity not to share information.” Overall, Huebert says the site is a good start. “We haven’t done this before. As long as you have the facility you can always upscale. The thinking is, just get the basic facility built.”

Maritime lawyer and Arctic expert Joseph Spears says the facility is a prime example of the state of Canadian Arctic infrastructure, or lack thereof. “When I look at Nanisivik, I see limited capability at great cost. It’s a dock with some fuel tanks and a trailer. It’s not a complex facility.” And the case for deep water? He says again, there is no magic there. “Waters around Baffin Island are fjord-like. It’s been glaciated. It’s good and deep. If you want to build a dock it just takes money.”

Spears says there’s no question that we need the capability, and as shipping opens up and resource extraction (oil and diamonds) becomes viable, this need will only become more prominent. But, when the procurement budget is being balanced, a base just is a lower priority than boats, says Spears. “What does the navy prefer, ships or docks? It prefers ships.”

Spears says what would really benefit the Nanisivik project is an overall policy reboot, a big picture plan for Canada’s Arctic, with proper integration of foreign, defence, security and ocean governance policies. “This is nation building,” says Spears.

Excepting all the lead up, the project’s design and implementation timeline isn’t so farfetched.

Retired Colonel Sylvain Lescoutre worked as a construction engineer at Canadian Forces Station Alert, the northernmost military post. He was also design manager of the North Warning System upgrade in the 80s, where they refitted the Distance Early Warning System, or DEW line, a cold war surveillance system spanning the Canadian Arctic. He saw the original design of the Nanisivik project and knew it would be a massive undertaking.

“The cycle for (northern) construction is normally about three years,” says Lescoutre. Design, contractor hiring and ordering material takes one year. Delivery another. Actual construction starts on the third year.

Richard Martin, project manager of the Nanisivik site from contracted company Almiq Construction Ltd, says the big difference in northern infrastructure development is the logistics. Their supplies are delivered annually by a single ship that always arrives at the end of August. Construction season for Nanisivik starts in the spring, when the road from Arctic Bay opens up. “We carry everything in one year before we have to use it. The materials for 2016 are on site right now,” says Martin. “If you were to forget something, you have a big mistake on your hands. If you are good at organization you don’t have problems.”

Another difference in Arctic construction is the necessary accommodation of permafrost — the frozen soil beginning about 12 inches below ground level. Structures are built on gravel pads or stilts so as not to degrade ground stability. Lescoutre says, “If the permafrost starts to melt, then you have settlement. If fuel tanks start to settle on soil, it’s not pretty.” Pipelines delivering fuel to the ships will also be elevated.

He says the decision to keep only an annual supply of fuel on site is puzzling and potentially risky. “Some years if the ice comes in early and the boat doesn’t deliver, there is no fuel the following year. We always tried to have two to three years fuel supply on Arctic sites.”

One topic of refuelling confusion is the Canadian navy’s current lack of Auxiliary Oiler Replenishment (AOR) capability, or fuel delivery ships. But new Joint Support Ships, which retired naval Commander Colin Darlington refers to as “floating moving bases,” are not scheduled for construction until 2017, and there is no intention of making them ice capable. “An AOR is a very capable vessel, probably a lot more than is necessary for most of the operations up north,” says Darlington. In past the Coast Guard has transferred fuel to naval ships operating in the Arctic.

Darlington says capability of the Arctic and Offshore Patrol Ships should help compensate for scale back of the Nanisivik Naval Facility. “The ship is a lot more self-sustaining and capable of maintaining other ships than a normal warship.” The Arctic patrol ships have additional bunkers for fuel storage, can carry fuel for delivery to other government vessels and have an oversized helicopter deck for resupply.

Nanisivik, says Darlington, is just one node in Arctic infrastructure development. Like Spears he says the question that should be asked is: where does the facility fit into the overall Canadian Arctic strategy? International capability comparisons and competition for Arctic sovereignty are common threads of polar policy conversation (think Russia, Norway, China). But Nanisivik, which could be considered a catalyst for infrastructure development in the Canadian North, hasn’t received much attention, and press on the patrol ships stops at capability concerns and funding disputes. “It comes to question, what is the Canadian intention,” says Darlington. “It’s the absence of that discussion which is of interest.” 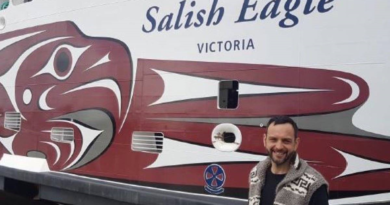 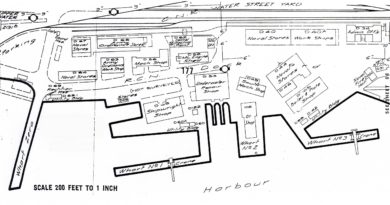