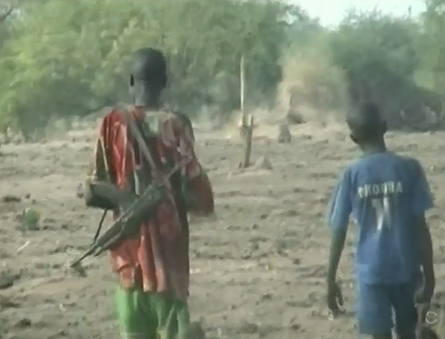 The use of child soldiers in zones of conflict throughout the world is a significant defence and security issue than needs more attention by a wider audience.  In support of that effort, on 8 February 2017 the Royal United Services Institute of Nova Scotia had the pleasure of hosting an enlightening presentation, “VTECS: An Opportunity for Professional Renewal” by Captain(N) Ken Hoffer, Royal Canadian Navy (retired).  Capt(N) Hoffer was accompanied by Joëlle Badman and Josh Boyter of Dalhousie University’s Roméo Dallaire Child Soldiers Initiative.  The event was well attended and included the Lieutenant-Governor of Nova Scotia, the Honourable J.J. Grant, members of the Halifax Regional Police and guests from veterans and other associations.

Capt(N) Hoffer gave a thorough description of the issue of child soldiers in the world, and of the methods the Dallaire Initiative’s Veteran Trainers to Eradicate the Use of Child Soldiers (VTECS) program is using to combat the problem.  Ms Badman and Mr Boyter were present to help promote the recruiting campaign for the second upcoming training session of the program, funded by Wounded Warriors Canada.  The Royal United Services Institute of Nova Scotia [RUSI(NS)] and guests were asked to help put out the call for veterans who they thought would be interested in participating in the program.

As laid out in the presentation, the concept and use of children by military forces is not new and has not been limited to ‘the bad guys.’  As Capt(N) Hoffer explained, anyone under the age of 18 and used for any number of military related purposes can be classified as a child soldier.  The iconic image of a young boy carrying an AK-47 rifle is not indicative of the only use of children.  In fact, most young boys and girls are more valuable at first as porters, spies, lookouts, human shields, general labour, guards, and bush wives. After a grooming period, the children can ‘graduate’ into front line combat troops.  In many long term conflict zones of the world, this practice has become normalized and children have become a new type of ‘weapons system.’  This ‘system’ is particularly effective against Western military forces and presents unique challenges.

Western militaries face lose-lose scenarios when put up against a combative force of children. First choice: the average Canadian soldier is going to hesitate before taking out a kid.  It is hard enough to kill an adult let alone a child who might remind you of your son or daughter back home.  There are many studies of the Second World War and Vietnam detailing Western military staying their trigger fingers.  The clear advantage goes to a child who has been brought up in a continuous environment of violence where life is cheap and the enemy has been de-humanized.  During the presentation, we saw a picture of a four year old who ISIS masters used to execute a prisoner.  The child will not hesitate.  Also, just because a person is young does not mean they are not effective, capable and fierce warriors.  Security forces should not make the mistake of underestimating children’s abilities.  Years ago, I met a man who used his Texan uncle to lie about his age in order to join the US Air Force in WWII.  At the age of 16, he was flying B-17 bombers over Nazi Germany.  Young boys and girls can be particularly lethal and will use their youthful fearlessness to advantage.

Second choice: the Western soldier kills the child soldier.  The soldier might have saved themselves and their squad mates but they will have to live with the fact that they killed a kid.  In addition, media coverage or opposition video propaganda will not be kind no matter the tactical circumstances.  Support from the home front will dwindle and turn on a single Twitter video post.  Lose-lose all around.

Coming back to that soldier who did pull the trigger – as Capt(N) Hoffer emphasized, seeing and doing acts in these failed state regions can result in severe psychological trauma.  Post-Traumatic Stress Disorder (PTSD) has become generally recognized by the public, politicians and the Canadian Armed Forces (CAF) as an injury suffered by military members.  Visible public efforts of people such as General Dallaire and Wounded Warriors Canada members have shone a spotlight on the issue.  Associated treatment programs are now more available.  Unfortunately, psychological issues affecting our soldiers can be complex.  As Capt(N) Hoffer explained, in the context of child soldiers, there is another psychological injury soldiers can suffer called ‘moral injury.’  Moral injury has been defined as an injury to an individual’s moral conscience resulting from an act of perceived moral transgression which produces profound emotional shame.  The concept of moral injury emphasizes the psychological, cultural, and spiritual aspects of trauma.  As an example, a few days after helping beat a Somali teen to death, Master-Corporal Clayton Matchee attempted suicide.  I would hazard a guess that guilt and shame of his actions played into his decision to hang himself.  The CAF and Canadians should be prepared to deal with the myriad of mental issues facing our military members if they are to be sent against children.

After the presentation, the question and answer session brought up a few interesting points.  It was identified that the CAF does conduct mission specific briefings to units before they deploy to areas with the likelihood of encountering child soldiers.  Rules of Engagement (ROE) have been established to give the soldier on the ground some guidance.  The impression during the Q&A session was the military needs to go further with their education and training in this field and they need to give the matter more attention than a few cursory PowerPoint lectures.  In addition, the concept of moral injury has to be recognized and emphasized.  It cannot just be lumped in with PTSD.  Another point brought forward was to expand the VTECS program to police organizations.  Capt(N) Hoffer had described some of the successful program work he had done overseas and mentioned that they were working quite often with local police forces.  The aim was to educate the ‘cops on the beat’ to recognize the signs of youth at risk. If you can break the incentive of a child being drawn into the orbit of a militaristic organization, then that is one less soldier.  It is a simple concept: just give the at-risk child a viable alternative and try to point them in a better direction.  As he explained, Canadian police do the same thing as gangs in this country are not above using children for nefarious purposes.  Unfortunately, for now because of the limited funding and mandate through Wounded Veterans Canada, the VTECS program is limited to military veterans.  It was agreed that more CAF education and eventually including former police officers as VTECS trainers would be logical and worthwhile.

Capt(N) Hoffer’s talk illuminated the urgent need for a coordinated, reasoned strategy regarding the issue of child soldiers.  The CAF needs solid ROE and education for their members before deployment.  Parliamentary politicians need to seriously debate whether we should be sending our forces to quagmires such as the rumored mission to Mali.  Like many failed states being considered for a Canadian military engagement, Mali is a witch’s brew of multiple government and non-government actors, generational warfare with several major uprisings, widespread use of child soldiers, crushing poverty, class and religious struggle.  Just from the perspective of using child soldiers, the opposition will use asymmetric means to break the will of Western countries involving themselves where they are not wanted.  One videotaped incident of a supposed ‘atrocity’ against an ‘innocent’ child and Western public stomach for the mission will evaporate.  One severe slip of discipline and leadership while struggling with rampant thievery from their compound helped result in the disbanding of the Canadian Airborne Regiment.  In the era of ‘fake news,’ hostile social media do not even have to be truthful, and the damage will be done.  Canada would have another national military stain.

So, does Canada send our forces to a place where they are damned if they do and damned if they don’t?  Politicians and the Chief of Defence Staff might have to seriously ask the question of whether to engage in the first place.  Sure, we can help and Canadian military members do great work in these places, but how long are we planning to stay?  We kept a large contingent of Canadians in Cyprus for three decades, still have members stationed there and that country is not in the clear yet.  These operations need to be viewed as multi-generational otherwise the blood and gold spent on them will be wasted. Twelve billion Canadian dollars spent on Afghanistan between 2001 and 2014 and what did it get us? According to reports, just a slide back to the bad old Taliban days.  Organizations like the Taliban, ISIS, and Al-Qaeda view their conflicts as multi-generational.  That is why they continue to develop their young as weapon systems.

As Canadians, we want to do the right thing.  The VTECS program seems to be a positive step towards breaking the use of children in war.  Educating security forces here and abroad about the practice and how to combat, prevent and eradicate it effectively will take time.  Just educating the ‘good guys’ on how to do no harm is a start.  Capt(N) Hoffer remarked that one of his African students asked if he wasn’t allowed a ‘girlfriend’ during a peace keeping mission.  From personal experience, I know many CAF members who still practice the habit of ‘travel to new places and have sex.’  Stressed men and women from all militaries and security forces need firm discipline and strong leadership on difficult missions. Trust from the local population is a crucial first step when trying to resurrect a failed state.

Capt(N) Hoffer closed his presentation with a personal anecdote from when he was the Executive Officer of HMCS Protecteur.  Canada had sent a large military contingent to participate in humanitarian efforts in East Timor in 1999.  While leading a shore party at a particularly grisly site, he overheard one of the ship’s company remark, ‘Why do we have to see this?’  Fair question.  Many places of the world are rife with ugliness and human misery.  Combatants will deliberately use their child weapon systems.   But it is generally conceded that the Western world including Canada has a duty to refrain from turning our backs on these pits of despair.  Through education and preparation, our forces need to be ready for the specific trials they will face.  The unique challenge of combating the child soldier will be difficult.  In addition, Canada must be prepared to adequately help Canadians returning from these missions in need of complex psychological treatment.

The immoral use of children for military purposes flourishes in too many failed areas of the modern world.  There are severe ramifications not only to the lost youth of these regions but to the security forces used to fight them.  But through the VTECS program, eloquent veterans like Capt(N) Hoffer are successfully advocating for better understanding, mitigation and eradication of this complex issue.

More information on the Roméo Dallaire Child Soldiers Initiative and Dalhousie University’s VTECS program can be found at: http://www.childsoldiers.org/

Veteran Trainers to Eradicate the Use of Child Soldiers