Today and for years in the future, the world and especially Canada will be ravaged by an annual wildfire threat which gets increasingly large and threatening as each year passes.  It is safe to say that this situation is mainly due to climate change and this is unlikely to be rectified in the near future.  The resources required by the provinces to combat these fires can be enormous and cost billions, not only in fighting and controlling the fires, but in destroyed infrastructure. . As we go to print, the Canadian Armed Forces is marshalling 350 personnel to support British Columbia which declared a provincial state of emergency in late July, and 120 have been earmarked to support Manitoba.  Canada is also being supported by firefighters from Mexico, Australia and other countries as our own resources have been stretched to the maximum. This support is mainly from the ground – the situation needs to change and change quickly.

What then, can be done from the air as an effective force multiplier?  Watching our meagre resources respond to this threat, one wonders why we can’t do better.  For example, fighting an out-of-control fire using helicopters with water buckets is hardly cost effective and is draining on the companies which supply such assistance. We witness small success for a very large effort.  Quebec and New Brunswick have water bombers but once again, they are few in number.  So what can we do nationally to rectify the situation?

Present Day Aviation Resources – What we have to work with

Although air tankers and helicopters are a highly visible part of wildfire response as seen on the daily news coverage, they cannot normally put out wildfires on their own. Rather, they provide critical support to the overall firefighting team(s).

Depending on weather conditions such as thick smoke or excessive wind, and the geographic features of the area, responding provinces can deploy or request aircraft or helicopter support to assist with fire containment and suppression. The various provinces contract aerial service fleets when required and deploy these resources to the fire areas in the case of actual wildfires. Or as a precaution, air resources are deployed to historical high-risk area in anticipation of the peak fire season.

Aviation assistance may be in the form of:

Air Tankers (aircraft purpose-built to drop slurry, foam, fire retardant or water) in bulk, such as modified C-130 or DC-10 aircraft.  These aircraft are normally based at fixed airfield installations. Positioning of these assets is critical to avoid long transit times thus allowing increased mission capability which in itself is a force multiplier.

Amphibious Air Tankers, such as the CL-215 and Air Tractor AT-802F Fire Boss, take off and land on lakes and rivers scooping up water as they traverse the surface.

Helicopters are, in this case, dual purpose in that they transport personnel quickly to hot spots as well as providing a vital role in fighting the fires by slinging water buckets below the aircraft.  They can quickly return to an open water source to reload many times in any given mission.  Royal Canadian Air Force (RCAF) tactical helicopter squadrons have this bucket capability.

For general aviation assets, water is either scooped up in a large bucket that hangs beneath the helicopter or drawn up into a belly tank integrated into the body of the helicopter. Foam can then be added to the belly tank if required.

Aviation assets, in addition to the actual “dropping” of fire suppression substances, also provide assistance which can include the following:

Certain types of equipment on various helicopters can, in addition, be used for infrared scanning, mapping and/or observation of fires, and for deploying crews who can rappel down to the site of a wildfire when there are no other means of access (or limited access).

This paper will not attempt to recommend the purchase of a specific type of aircraft for the proposed RCAF water bomber squadron, but we should use funding for this purpose to purchase and support these assets from Canadian made aircraft produced by companies such as Viking Air in Kelowna BC or Bombardier in Montreal QC.  We have the knowhow, technology and wherewithal to do so.  Political will is needed to make this vital resource available, and the sooner we make this happen, the better off we will be.

To have a national firefighting resource available for deployment to critical fire areas, we require a national coordinating body to liaise and work with the provinces.  This capability already exists in the form of the Joint Rescue Coordination Centres (JRCC).  Three of these ‘headquarters’ are geographically located perfectly in the western, centre and eastern areas of Canada.  They are:

An additional role for the JRC Centres would need to be added, to include coordination and dispatch of firefighting resources during the fire season.  Liaison teams would be designated to work with the provincial emergency management offices or crisis centres requiring this assistance. JRCC staff would be manned with experts in this field and when these cells are in operation, provide a daily or weekly air task order to the resources allocated to specific fire zones designated by provincial authorities.  The air task order would of necessity include civilian resources contracted by the individual provinces to assist the overall effort.  This is one mission the RCAF can do well.  Setting up and training civilian contractors for this new approach would also be a requirement and provided by the JRCC personnel.

Finally, command and control in the air.  An ‘air boss’ would be required to control those assets assigned in all designated areas, similar to the search masters who control assets during a search and rescue (SAR) mission.

Details of these suggestions would have to be worked out by the RCAF if indeed an RCAF bomber squadron were stood up.

What about the “off-season”?

There will be the activists who will object to the RCAF having such an expensive resource by saying they would be of no use once the fire season has ended. This is definitely not the case. Once the fire season is over, training kicks in, not only for the aircrews who need proficiency but using this time to train the civilian counterparts who will be employed in the next season.  Due to turnover in most businesses, this will be a continual requirement.

Canada can also enter into agreements with Australia and NATO countries who also desperately need these resources to fight fires in their own backyards.  Greece, Spain and France have that capability, but additional resources can always be used.  Providing the aircraft purchased for the RCAF were turbo-props, with a high cruise speed and with the range to carry out trans-oceanic deployments, Canada could offer our resources when requested to provide this humanitarian assistance.

A Basing Plan and Numbers

A proposed RCAF water bomber squadron should have a unit establishment of 24 aircraft.  This number would provide each JRCC with 8 aircraft so that the resources can be equally divided across the country.  Working on the normal 80% serviceability rate, on any given day each JRCC would have 6 aircraft available for tasking.  If the RCAF determines that the entire squadron be based in one location, the ideal location would then be Trenton, Ontario, central for deployment to the other JRCC when requested.

Currently the RCAF is facing a shortage of pilots and the reader may say, where will the aircrews come from?  Wouldn’t this be an ideal role for Air Reservists or airline pilots with previous military training enrolled in the Air Reserve for this purpose?  This could be an appealing opportunity for them to contribute to their country without having to join the Regular Force and face relocation.  This would be a tremendous opportunity to serve their country as well as providing humanitarian assistance at the same time.

Based on real world events with respect to climate change, and increased threats of annual forest fire devastation, a real need exists in this country to provide the provinces with a national resource capable of responding quickly to these natural disasters. Acquiring a squadron of long range, mission-specific air tankers for the RCAF would be one of the best contributions our national air force could undertake.

It is therefore recommended that the government of Canada and the Department of National Defence quickly undertake a feasibility study and determine the best course of action to provide this country with an RCAF water bomber squadron at the earliest opportunity.

Murray Lee is a retired air force pilot who served in the RCAF and CAF for 37 years. He was Commanding Officer of 408 Tactical Helicopter Squadron in Edmonton where he flew the CH-135 Twin Huey and used the water bucket described in the article. He is currently the aviation representative to the RUSI(NS) Security Affairs Committee. This work is the sole opinion of the author and does not necessarily represent the views of the Canadian Department of National Defence, the Canadian Armed Force, the Royal Canadian Mounted Police or the Royal United Services Institute of Nova Scotia. The author may be contacted by webmail. 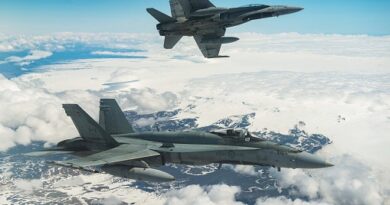 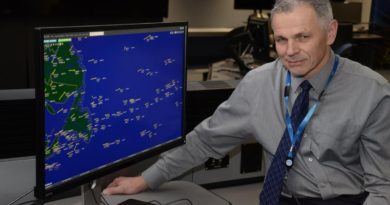