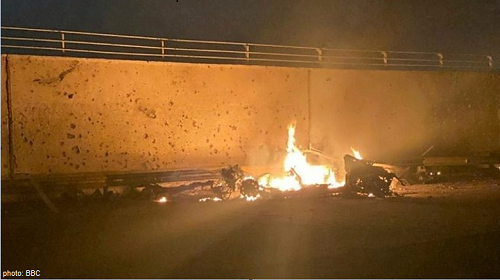 On Tuesday, 14 January, Democratic Congressional Representative John Garamendi (Calif.) said in a CNN interview that the killing of General Qassem Suleimani was merely “a case ‘the tail wagging the dog’ in order for President Trump to ‘change the channel’ from the Impeachment proceeding” ongoing in the United States.  Just one day later, Democratic Congressional Representative Bonnie Watson-Coleman (N.J.) said on CBC radio’s As it Happens that the 57 Canadian citizens killed when Ukrainian Air flight 752 was shot down, killing all 176 onboard, were merely “collateral damage” in a major struggle between the United States and Iran over the latter’s desire to acquire nuclear weapons.  Both commentator are members of the Armed Services Committee and both said there was no information in the briefing to the committee that showed an imminent threat to any U.S. embassy in the region, much less the four being claimed by President Trump.

The confusion over the killing of Suleimani, the reasons for it, and the terrible consequences after it must be put into a strategic context.  The major issue is the Iranian anti-America and anti-Israel (called the Great Satan and Little Satan, respectively) doctrine and their ambitions to expel American armed forces from the Middle East.  Syria and Iraq have recently joined Iran in making this demand.1  Enormous ambitions and major forces are at work as the United States maintains large armed forces units in many Middle East countries while the Revolutionary Guard serves as the enabler for fundamentalist Iranian aspirations.

Almost lost against this tumultuous backdrop is the death on Friday of the Sultan of Oman, Qaboos bin Said, at the age of 79 after a long illness from colon cancer.  Unmarried and childless, his normally hereditary title has been passed to his cousin, Haitham bin Tariq Al Said, the Culture Minister in the recent government.  Sultan bin Said mediated the original 2015 anti-nuclear deal between Iran and the United States.  The moderate voice, sometimes the lone such opinion, has been lost just when it is needed the most.  Dr. Kristian Coates Ulrichsen of Rice University’s Baker Institute worries that the new sultan could be pressured to move away from their neutral position before he can fully take over the position of sultan.2

The CBC documentary “Who was General Soleimani?” describes his rise through the ranks of the Iranian Republican Guard during the Iran-Iraq war and his subsequent emergence as the leader of that independent military force.3  Formed in 1979 by the decree of Ayatollah Ruhollah Musavi Khomeini, the Revolutionary Guard protects their Islamic republic political system, including from coups by the Iranian military or “deviant movements” by the public.4

The killing of Soleimani was a typically Trumpian move to exert pressure on Ayatollah Ali Khamenei to accede to American demands that their nuclear ambitions be abandoned.  Restrained by protocol from killing senior political leaders, it was a demonstration of the American military capability to reach out, anywhere and at anytime to punish those who do not accede to their policies.  It was also a warning to Iran to stay out of Oman.  The Defence Secretary Mark Esper confirmed, and was substantiated by Stated Department sources, that the information provided in briefings to House committees made no reference to imminent threats to any American embassy.5

President Trump said today “it did not matter” that there were no ‘imminent’ threats because of the “terrible” nature of Soleimani and the number of Americans killed in Iraq due to his support for militia forces there.6  However, General Stanley McChrystal, the former commander of American Special Forces Command, said in the CBC documentary that “Soliemani was not a terrorist,” only “a professional and highly skilled soldier fighting for his country.”  One man’s terrorist can definitely be another man’s freedom fighter.

The Economist7 gave extensive coverage to the likelihood of Iranian retaliation for the American killing of the “second-most-powerful man in the country” and what form the inevitable retribution would take.  The most likely explanation of the shooting down of Ukrainian Air Flight 752 is as a retaliatory act by the Revolutionary Guard, either directed by the Ayatollah himself, who led the funeral services for Soleimani and wept openly during most of it, or by a lower-level commander in the Guard who was demonstrating their capability to resist foreign influence in Iran’s internal affairs (and his own willingness to be bold, as Soliemani had been).  The public grief of the Iranian spiritual and political leader for the fallen hero would be all the authority needed for a zealot to take action.

Claims by Ayatollah Ali Khamenei that the shoot-down was a “bitter accident” are not credible.8  The Ukrainian Air flight was the eighth flight to depart the airport at Tehran early that morning.  All aircraft leaving were easily observable by eye from the missile emplacement (a position closer that than of the video that shows the firings).  The person in charge knew exactly in which direction the flights were leaving and their normal pattern of flight once clear of the ground.  In any event, and despite mounting anger in the Iranian streets, the Ayatollah has declared his support for the Revolutionary Guard in a rare address during his sermon on Friday.9

Supposedly, the decision was taken to fire the first missile because the commander of the missile launcher mistook the aircraft for a cruise missile.10  However, the aircraft was departing the local area and was not closing the airport.  Also, American cruise missiles are generally capable of flying at high subsonic speeds (about 550 mph for the ubiquitous Tomahawk BGM-109) and use terrain-following radar to fly at heights between 90 and 160 feet.11  Extensive analysis by BBC News shows the aircraft was climbing, probably at a speed not exceeding 350 mph and was struck by the first missile when the aircraft had reached nearly 8,000 ft.12  The movements of the aircraft were entirely in keeping with a commercial aircraft, it was showing normal navigation lights, and in no way did its movements resemble those of a cruise missile.  In other words, it did not represent a threat and was therefore not a valid target.

The second missile was fired nearly 40 seconds after the first and 15 seconds after the first had struck the aircraft.  The length of time between the two shots indicates that two separate decisions were taken to engage.  Such an engagement timeline indicates a clear intention to ensure the target was destroyed, not merely damaged or disabled, by firing the second shot.  In other words, this was a very deliberate act and not a mistaken firing.

Canadian anger is mounting over this event, and several prominent citizens and media contributors are among those who feel that the diplomacy of the Canadian government representatives is too forgiving under the circumstances.13, 14  Certainly, with no formal diplomatic status and permanent representation inside Iran, obtaining even simple concessions from Iranian leaders will be difficult for Canada.  Even more problematic is the fact that this heinous act was carried out by the Revolutionary Guard and not the Iranian regular military.  Their social status and importance as insurance for the government leader against a popular uprising means they probably are immune from prosecution or even disciplinary action.

However, I believe my analysis shows that the Ukrainian flight was deliberately selected from other potential aircraft, including a Lufthansa flight just before it.  This retaliation was taken by the Revolutionary Guard most likely because they knew that the flight was headed for North America after a short stop in Kiev and that many North Americans were onboard.  To the guardsmen who fired the missile, Canadians are indistinguishable from Americans and the many Iranian citizens onboard were on their way to perdition in what the guardsmen see as a northern offshoot of the Great Satan.

The Canadians were indeed merely collateral damage in a high stakes game of strategic poker that is far from over.  That act of mass murder is really only a minor incident in what could still escalate into a major regional war.  In that a part of the world where life can be lost in ways that seem incomprehensible to North Americans – more than 50 mourners were crushed by the multitude when Soliemani’s funeral procession took place in his home city of Kerman – loss and sorrow are not strangers.  However, the killing of General Qassem Suleimani was an incendiary provocation to the society that viewed him as a hero and a role model.  The full consequences of his death will not be known for years yet to come.