A ship’s badge1 is a design representing one of Her Majesty’s Canadian (HMC) Ships.  Ships of all nations have long carried emblems and devices to identify themselves to others.  Prior to November 1948 Royal Canadian Navy (RCN) ships used unofficial badges.  After then, official badges, designed in accordance with heraldic practice, have been approved for Canadian ships in commissioned service.  The ship’s badge is worn by members of the ship’s company, often as a cloth patch sewn to a jacket, and is used on letters and cards.  The badge is displayed on the ship’s battle honours board, life-saving rings, boats and notice boards, and at locations throughout the ship such as the ship’s bridge and brow.

When a badge is required for a ship, it is created by the Canadian Heraldic Authority headed by the Governor General and administered by officers including the Chief Herald of Canada.  The badge is developed by officers of the Authority and may include input from naval staff and other interested parties.  The design in the field of the frame has a relationship with the ship’s name.  A badge is passed from one ship to the next ship of the same name.

The shape of the frame of a badge used to indicate the type of ship.  Since 1948 badges for HMC Ships have been standardized as a circular rope frame as illustrated below.  The naval memorial ship Sackville retains a historical diamond frame.

Badges are at times incorrectly called crests.  Crest is a heraldic term referring to the uppermost device of a coat of arms in the position of the naval crown in a ship’s badge.  An embroidered cloth badge worn on blazers and jackets is often but incorrectly referred to as a crest, which likely contributes to sailors’ colloquial misuse of the term.

The book Designs of Distinction provides a comprehensive history and description of unofficial RCN badges.

A PDF of this Note may be downloaded here.

Note: 1. This Note does not address badges for ships’ boats and other, non-ship, units. 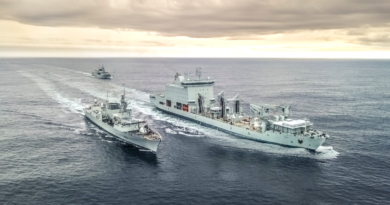 The Deployability of Motor Vessel ASTERIX 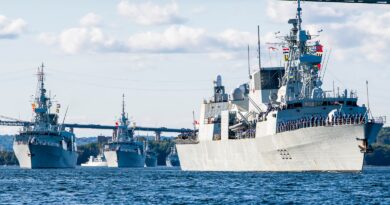 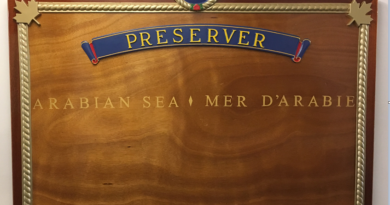