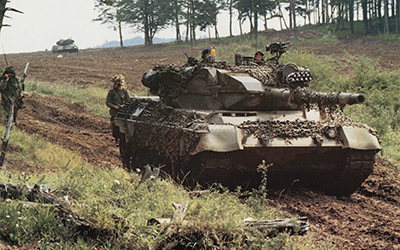 There was an interesting and timely article in the Autumn 2016 edition of the Canadian Military Journal concerning the 1975-79 unexpected purchase, delivery and deployment by Canada of 128 German Leopard 1 tanks to replace our rusted-out fleet of obsolescent Centurion tanks.  That procurement parallels somewhat today’s machinations over fighter aircraft for the Royal Canadian Air Force.  Serving in Cyprus in 1975, followed by a tour as a “grunt” on staff with Headquarters Air Command, followed by a year’s language training, I missed the main battle tank (MBT) bun fight within the Army and at National Defence Headquarters.  The issue over a MBT then was, as it is a now over aircraft, a contest over three somewhat incompatible options: first, refurbish & make do with what you’ve got; second, wait and procure the very best science and industry can produce some time down the line; or third, procure something in-between and hope it is good and will last long enough to meet immediately predictable needs.

The Israelis have demonstrated that rebuilt and up-gunned Centurions were useful decades longer than might have been expected.  Many of our cavalrymen of the day favoured that kind of rebuild solution.  Making do then seemed the saw-off necessary if we were to get a much better MBT expected to be available ten years or so on down the pike.  The American Abrams, the German Leopard 2 and the British Chieftain or the later Challenger 2 were popular longer-term preferred procurement choices for the Canadian Army.

In the end though, political and economic pressure from the Europeans, the Germans in particular, carried the day.  Trudeau the Elder, grossly unpopular within NATO because of our demonstrated fading commitment to the alliance, found himself between a rock and a hard place.  With Canada actively looking for enhanced trade and economic opportunities on the Continent, almost Trump-like, the Europeans of the day said, in effect, “on partnership defence, pay up or shut up and do so now! Otherwise, no other deals!”

Prodded along by the economists and internationalists in his own cabinet, the folk in the Privy Council Office and those in the then Department of External Affairs, Trudeau wrote the necessary cheque to procure the Leopard 1 MBT as the Centurion interim replacement.  With the enthusiastic help of the Germans, Canada’s buys of the Leopard 1, which was in its final stages of extended production before retooling for the Leopard 2, came in just on time and within small change of being on budget.  So, the Leopard 1 turned out to be a procurement marvel.  Of course, there is always a downside and unpredicted consequences.  An interim solution, we ended up running it as our MBT right through to our Afghan Campaign, fully 30 years later.  The interim solution became the final one.  When our Leopard 1s deployed to Afghanistan turned out to be under-armoured and crew-hazardous for a counterinsurgency operation, the Germans and the Dutch lent us Leopard 2s to see us through an urgent and immediate operational requirement.  Our inventory subsequently rose to 127 Leopard 2s, obtained variously as surplus kit sold to us by Germany, the Netherlands and Switzerland.  The price was right, although the problem remains the same, our procurement process…isn’t!  We’re consistently “johnnie-come-late,” buying in on kit that has gone or is in the process of going out of production.  Fortunately, we didn’t get to “the big war” along the way.  It does beg the question though: did we buy the right tank in the 70’s for the wrong reasons, or, the wrong tank for the right reasons?  Which leads me to the question for today.  Does it make any sense whatsoever to be contracting for another piece of kit, in this case the Super Hornet, which is really a third-and-a-half generation aircraft, and that is at the end of its production run, when the rest of the world is moving along to fifth generation and already thinking what comes beyond that?

Canada’s problem is the same one that has troubled us fairly consistently since about 1960.  We decide just how little we can do that will placate our allies, while avoiding upset for our taxpayers with the robust defence spending actually needed.  Then, we set that all ass-backwards as the goal and write a statement of requirement that fits it.  It’s the Canadian Way; develop the appreciation after you’ve made your plan.  And it’s at about that point where we go rushing off to see what’s on sale down in the bargain basement.  Too often too, decisions out of Ottawa today answer two other questions: what did we promise during the election campaign, and is this going to be popular?

Doing that which is the most sensible or necessary aren’t always factors in decision-making at the confluence of the Ottawa and Rideau Rivers.  And the decisions, right or wrong, come along much too late!

Originally published in the United Services Institute of Nanaimo (North Island) Newsletter, Volume 25, No 01, January 2017, and re-printed with permission.

This Comments was first published as a ‘Musing Column’ by Colonel (ret’d) W.J. (Bill) McCullough, MSC, CD, a Past President of the USIN(NI) and the long-time Chair of that Institute’s Military Committee.  The column is the result of his own research and middle-of-the-night deliberations.  The views and conclusions expressed are his own and do not necessarily represent the views of the Canadian Armed Forces, the Canadian Department of National Defence, the Royal Canadian Mounted Police, the Royal United Services Institute of Nova Scotia or the United Services Institute of Nanaimo (North Island).  The author may be contacted by email at: [email protected]