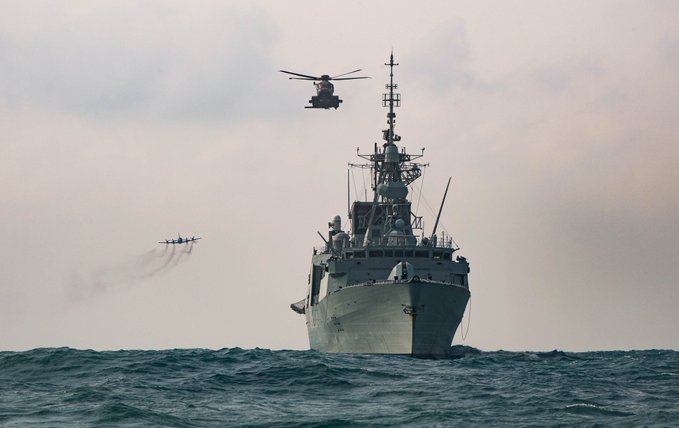 We face an evil trinity.

National and international governments have to stop looking at the Russia-Ukraine situation as a ‘one-of’ and remember that Putin invaded and took over the Crimean Peninsula and is currently fighting Ukrainian troops in the Donbass area.  He also invaded and took over the Abkhazia and South Ossetia regions of Georgia in the Russo-Georgian War of August 2008.  We need to understand that Putin is quite prepared to launch operations to acquire territory that he wants. When the Soviet Union ceased to exist as a single political entity (it was never a single ethnic entity) on 25 December 1991, there were ethnic Russians left in the nine other ‘republics’ and Putin treats this as Hitler did with the Sudetenland of Czechoslovakia in 1938.  He has said that the dismemberment of the Soviet Union was the twentieth century’s greatest geo-strategic cataclysm.

Polish president Andrzej Duda opined that Europe is now closer to war than it has been in 30 years: “beginning with the time of the Russian aggression against Ukraine, a real specter of conventional warfare has returned to our part of Europe for the first time in decades,” he told the Lithuanian National Security Conference in Vilnius last October.

There are some frightening details to consider if Russia initiates action in Ukraine.  Ukraine may not be a member of NATO, but there are NATO troops in Ukraine conducting training programs for the Ukrainian military.  Canada is among them.  See the Canadian Army articles “Combat Ready” and “Mentor and Advise.”

If Russia initiates hostilities and NATO forces are engaged, that may not be enough to trigger Article 5 of the North Atlantic Treaty, but it will excite the NATO governments involved and there will be sizeable measures taken by the 30 member nations.  If open conflict starts it will likely not be contained to Europe.

Ten years ago, China claimed almost the entire 3.5 million square kilometre South China Sea, disregarding Brunei, Indonesia, Malaysia, Philippines and Vietnam.  Taiwan was also affected, but being a break-away region, it sits in a different category in the Chinese mindset.  China then took control of the uninhabited Scarborough Shoal from the Philippines.  China began pouring cement on reefs and rocks, turning them into militarized artificial islands with air bases and naval stations.

On 5 May 2020, Chinese and Indian troops began a series of border skirmishes along the Sino-Indian border.  Later in May, China challenged Indian road construction in the Galwan River Valley.  Continued fighting in mid-June took the lives of 20 Indian soldiers.  On 7 September, shooting broke out along the Line of Actual Control that separates India and China.

In its fourth weapons test this month, North Korea fired two short-range ballistic missiles from the Sunan airport in Pyongyang into the sea.  The US responded with sanctions … again.

Any one of this unholy trinity can provoke hostilities, but we should not discount the nightmare scenario of all three sending tanks, troops, ships and aircraft into action simultaneously in coordinated or coincidental operations against (a) Ukraine, (b) Taiwan and the southern and western regions of the South China Sea, and (c) South Korea and/or Japan.  Perhaps unlikely, these contingencies are possible, forcing western allied forces to contemplate how they would respond with their forces spread thin or envisaging which region(s) they would ignore.

Major Tim Dunne is a veteran of 37 years as a Canadian military public affairs officer. His appointments include Senior Public Affairs Officer with the Canadian Contingent – United Nations Emergency Force (1978) and the United Nations Peace Force in the Balkans (1995); Deputy Director – NATO Press Information Centre in Tuzla, Bosnia Herzegovina (1996); Chief of Media Relations – NATO’s Allied Forces Southern Europe (2000-2004); and Military Relations Advisor to the Nova Scotia Government (2009-2010). He is currently an adjunct professor of communication studies at Mount Saint Vincent University, Halifax. This work is the sole opinion of the author and does not necessarily represent the views of the Canadian Armed Forces, any department or agency of the Government of Canada, or the Royal United Services Institute of Nova Scotia. The author may be contacted by email at RUSI(NS).