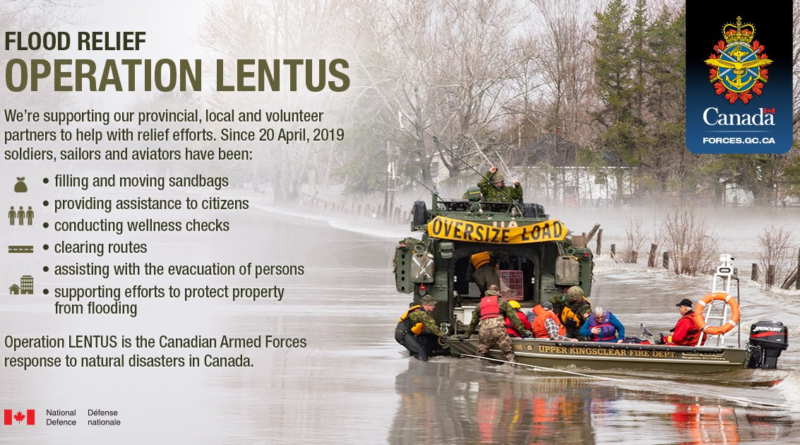 The Canadian Armed Forces (CAF) is not a first responder in an emergency. Responsibility for a response to an emergency within its boundaries is first that of a municipality (village, town, city), and that of the province when more than one municipality is involved, the emergency is beyond the capacity of an individual municipality to deal with at the time, or the situation affects the whole province. If more than one province is involved, then the federal government becomes the primary actor for the coordination of a national response. The CAF responds to the direction of the federal government and initiates a domestic operation.

For simplicity, this note will cover the CAF response to a natural disaster only. This note will discuss a situation where a single province is asking the federal government for support for a single major issue, for example, a flood. In all cases, the province will formally ask the federal government through the Minister of Public Safety (MPS). It is through that office that a federal response is developed. Greater detail can be found in the references listed below.

It should be noted that the province will ask for an effect from the federal government and not for specific resources. The MPS will coordinate an overall federal response which may include several government departments. The Department of National Defence is just one department that can bring extensive resources to the site of the incident. The MPS ensures the response is coordinated on behalf of the Government of Canada. The Department of National Defence will respond through the CAF chain of command with resources whether manpower, equipment and otherwise to respond to the event or incident.

Operation LENTUS is the name for a Canadian Armed Forces response to a natural disaster in Canada. The operation was first used in 2010 for hurricane response in Newfoundland.

Canada is divided into six Joint Task Forces: Atlantic, East, Central, West, Pacific and North. In each Joint Task Force region there are units that are designated for rapid response for domestic operations. These are known as Immediate Response Units (IRU).

IRU are found in the Army, Navy and Air Force in some form or other. The Air Force coordinates an air response to all operations and its resources are strictly controlled and coordinated. The Navy usually has a duty ship on each coast capable of reacting as directed on short notice. The Army has four divisions based on geography.

IRU are organized in such a way as to bring the right people, equipment and resources in the best way possible and most importantly in the shortest time possible in support of the Provincial Emergency Management Organization. In order to do this the IRU deploys a “reconnaissance party” (recce).

The reconnaissance party is organized to bring key individuals from the chain of command of the unit and specialists, capable of assessing the task as directed. The party usually deploys within 24 hour of the request, sometimes shorter if necessary.

The next element to arrive, usually within 24 hours of the recce arriving, is the “vanguard.” It is usually a company-sized organization of around 100 personnel. It has the necessary manpower, specialists, vehicles, equipment and resources to start the initial task. This means it can be larger or smaller based on the information provided by the recce. It is completely self-contained and may have the capacity to set up a separate camp or to house itself in existing infrastructure to operate from within the affected area.

The last part is the “main body” of the IRU. It will come with far greater resources and specialized equipment that are specifically allocated for a specific task such as a mechanical sand bag loader or water purification equipment. It may also include extra material needed by the local residents such as bottled water, food hampers, extra tenting, mobile kitchens or anything else as noted by the recce. The main body is usually deployed within 72 hours of a request from the province affected.

Every effort is made to enable the province to resume all of the domestic operation as soon as possible, in other words, once the province feels that the situation is securely back within its own capabilities. The IRU will then return to its base and re-constitute for any future effort. In a domestic operation the military is the last resort. The government is in a “no fail” situation when Canadian lives are at stake. Failure is not an option. 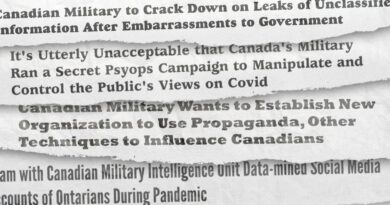 The Rise and Fall of Military Strategic Communications at National Defence 2015-2021: A Cautionary Tale for Canada and NATO, and a Roadmap for Reform 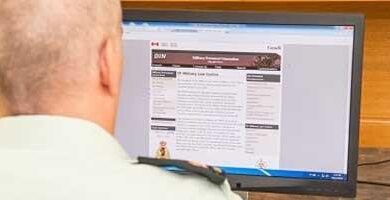