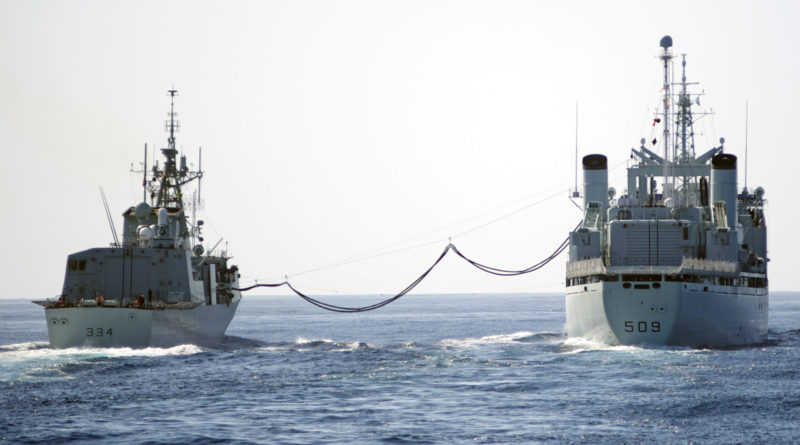 Canada is a signatory to a NATO Standardization Agreement which provides descriptions of types of naval and non-naval vessels for use by planners, operators and analysts.  A naval replenishment oiler, defined in the guide as an auxiliary vessel and written per naval writing convention as “auxiliary oiler replenishment” is designated as an AOR.  The following definitions and comments explain terms.

Auxiliary Vessels. All ships and vessels under naval control employed in support of naval forces primarily on the high seas.  Auxiliary vessels are one of five groupings of non-combatant vessels, which tend to be role specific and may possess an armed or combat capability intended primarily for self-defence.  In comparison, there are also eight groupings of combatant vessels which possess some sort of inherent armed or combat capability primarily intended for offensive use.

Oiler (AO).  A naval or merchant tanker specially equipped and rigged for replenishing other ships at sea.

Oiler Replenishment (Naval) (AOR).  Ship of at least 140 metres capable of providing rapid replenishment of POL (petrol, oil, lubricants) and solid store products.  Note that an oiler is defined as a ship, so it is redundant to write ‘replenishment oiler ship’ or anything similar.

Tanker.  A ship designed to carry liquid petroleum cargo in bulk, including a combination carrier when being used for this purpose.  A tanker moves bulk cargo between fixed locations.  The term is also used colloquially by sailors of the Royal Canadian Navy (RCN) to refer to an AOR.

Replenishment at sea (RAS).  Those operations required to make a transfer of personnel and/or supplies when at sea.

Vertical replenishment.  The use of a helicopter for the transfer of materiel to or from a ship.

Supplies.  All material and items used in the equipment, support and maintenance of military forces.

Sustainability.  The ability of a force to maintain the necessary level of combat power for the duration required to achieve its objectives

Logistic sustainment.  The process and mechanism by which sustainability is achieved and which consists of supplying a force with consumables and replacing combat losses and non-combat attrition of equipment in order to maintain the force’s combat power for the duration required to meet its objectives

Support.  The action of a force, or portion thereof, which aids, protects, complements, or sustains any other force.

Combat service support.  The support provided to combat forces, primarily in the fields of administration and logistics.

Afloat support.  A form of logistic support outside the confines of a harbour in which fuel, ammunition and supplies are provided for operating forces either underway or at anchor.

Service and support vessels.  All vessels and craft under naval or government control not designed to operate at sea, though many can go to sea in some circumstances. Also includes craft of any size which are not self-propelled.

An AOR provides afloat support for the purpose of logistically sustaining forces.  From the above definitions it is evident that an AOR is more than just a supply ship.  The term supply ship is limited in what it indicates an AOR can do, and is better applied to cargo ships.  Besides replenishing fuel, ammunitions and supplies, a Canadian AOR provides a range of services (see below) to other units the AOR is supporting.  The term support ship is more descriptive, especially when used with non-naval audiences (‘combat service support’ is a common army term).  However, the term support is in broad use and may not provide enough understanding of an AOR’s role.  To state that an AOR provides sustainment is a good explanation of that ship’s purpose.

Warships and auxiliaries.  Extract from the San Remo Manual:

(g) warship means a ship belonging to the armed forces of a State bearing the external marks distinguishing the character and nationality of such a ship, under the command of an officer duly commissioned by the government of that State and whose name appears in the appropriate service list or its equivalent, and manned by a crew which is under regular armed forces discipline;

(h) auxiliary vessel means a vessel, other than a warship, that is owned by or under the exclusive control of the armed forces of a State and used for the time being on government non-commercial service;

(i) merchant vessel means a vessel, other than a warship, an auxiliary vessel, or a State vessel such as a customs or police vessel, that is engaged in commercial or private service;

In Canada’s case, Protecteur-class AOR meet the San Remo criteria of being warships whilst at the same time meeting the NATO definition of being auxiliaries.  The Resolve-class ship leased as an interim AOR by the RCN is an auxiliary as it is under the command of a civil master and has a civil crew in addition of an embarked naval mission team.

AOR services.  An AOR provides the following to other ships (including other oilers), boats, aircraft and ashore.  Services may be provided while the AOR is underway, underway but not making way (drifting), at anchor or alongside, either directly from the AOR, by boat or by vertical replenishment.  The AOR often has more qualified personnel (e.g., doctors), or special onboard equipment (e.g., X-ray machines) and mission embarked equipment (e.g., aircraft ‘test benches’), than in supported warships.

Another term that is occasionally, though incorrectly, used when speaking of replenishment oilers is “big honkin’ ship.”  That term originated in the early 2000s with the then-Chief of the Defence Staff General Hillier and referred to an amphibious ship to transport and land army and other elements of the Canadian Armed Forces.  With the demise of the Special Contingency Task Force concept and the concomitant  landing ship, the term became available and has been applied, albeit colloquially, to AOR replacements.

Possession of an AOR allows a navy to sustain far distant forces and extended duration operations, thus providing the owning state more options when considering missions.  An AOR is a mark of a ‘blue water navy,’ a navy capable of deploying globally, and when in sufficient numbers is a major part of a ‘balanced fleet.’ 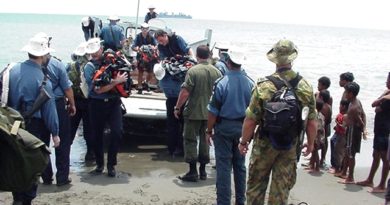 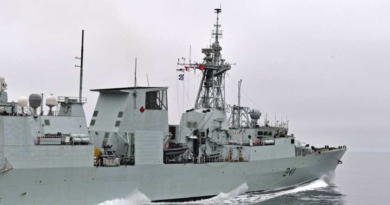