A PDF of BG Satterfield’s presentation slides is available here.

On July 21, RUSI(NS) hosted Brigadier-General (BG) Shawn R. Satterfield, Special Operations Command North, in a Zoom presentation to an audience of around 80 participants.

Dr Ben Gochman of The Watch (USNORTHCOM magazine) gave the introduction in an event moderated by RUSI(NS)’ Colin Darlington and Tom Birchall.

BG Satterfield, with members of his staff present, spoke with RUSI(NS) and guests from USNORTHCOM headquarters in Colorado Springs. He started out with an explanation of what USNORTHCOM’s mission is, saying NORTHCOM has “identified multiple approaches to the homeland which must be defended.” This includes a northern approach, a southern approach and a maritime approach. The northern approach includes the Arctic.

BG Satterfield said that the primary mission of US NORTHCOM is homeland defense and that one of its many activities is “supporting civil authorities.”

In an informative lecture for the non-military attendees in the audience, he mentioned that in fact USNORTHCOM treats the United Kingdom as a regional ally, along with Canada, due to its islands in the Caribbean which along with the Bahamas fall under USNORTHCOM’s jurisdiction.

He as well stressed the importance of the “integrated and interdependent economies” of both Canada and Mexico.

This includes to “deter, deny and disrupt irregular threats” to the homeland, “by, with or through our partners.” These points BG Satterfield stressed several times to his Canadian audience.

Satterfield as well stressed that the US aims to “compete below the level of armed conflict.”

He added that his office’s efforts are part of the military’s rebounding from two decades spent on counterterrorism and counterinsurgency to return to strategic competition.

BG Satterfield then moved on to discuss the Arctic region. He began with the issue at the top of the mind of Canadian policymakers, which is climate change. He explained that climate change was creating new opportunities and new challenges in the Arctic. As the ice melts in the Arctic region, this opens the region up to new economic activity and transportation, and opens up as well the security environment.

He said the US goal is a “secure and stable region in which US national interests are safeguarded.”

BG Satterfield says US-Canada cooperation in the region dates back to the Devil’s Brigade. This was a World War Two force comprised of 3000 American and Canadian volunteers who were first deployed in a homeland defense mission to the Aleutians, part of the invasion force of a Japanese-occupied island of Alaska in 1943. Japanese forces evacuated before the invasion, so the first combat seen by the Devil’s Brigade was in Italy later in 1943.

For SOCNORTH’s goal in the current security environment in the Arctic region, Satterfield said, “It is paramount that forces operate and train in the environment they will potentially fight in.”

This includes ARCTIC EDGE, a regular exercise in Alaska attended by a large number of US Special Operations Forces and Canadian partners.

“Competent Special Operations Forces cannot be created after emergencies occur,” Satterfield said, reminding those in attendance of the potential costs.

BG Satterfield said there were three vectors built into his mission. The first is to “advance capabilities.” This includes making sure the core tasks of Special Operations Forces can be done with success. The second is to “prepare the environment,” which includes increasing knowledge of the environment and setting the right conditions for competition, crisis and conflict. The third is to “demonstrate readiness.” Readiness has been a key goal of the US military in recent years.

A robust Q&A session followed, in which RUSI(NS) members and guests expressed their thanks for the opportunity to meet with such a key figure in North American security and defense. The Voice of America journalist and RUSI(NS) member who did this write-up appreciated a chance to learn from such a senior figure in his field.

After the event, BG Satterfield wrote “It was an honor to be invited by RUSI(NS) and USNORTHCOM to speak on Special Operations efforts in the Arctic. The opportunity allowed SOCNORTH to highlight the importance the Arctic plays in today’s global strategic competition. In addition to affording us the opportunity to discuss the role of SOF in this austere environment, it provides us with an operational platform to work closely with our allies and mission partners.  The number and diversity of attendees from around the world demonstrates the significance of a coalition approach to ensuring an open, secure, and stable Arctic.” 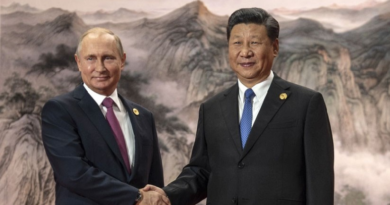 Sino-Russian Cooperation in the Arctic: A Cause for Concern for the West? 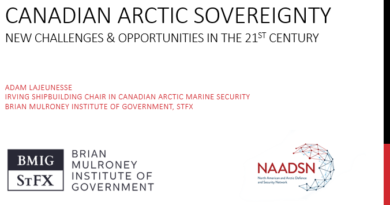